Apologies, dear readers, for the delay between posts, but like many of you in late December, I’ve been on holiday.  Carole and I were in France for two weeks, and while I did explore a little bit down a side avenue of research, the main purpose of the trip was family.  Living family, that is.  Carole is French in origin, and we were there to spend the holidays with her family.

We flew in via non-stop from Seattle to Paris, and direct from the airport caught the TGV to Montpellier, and from there a regional train to Carcassonne.  The TGV is France’s high-speed passenger rail system, and the trains can get up to 200 mph, which would be pretty exciting except they’re so dang smooth on the rails that there’s not much sensation of speed until suddenly you pass one going the other way.  The other train is suddenly and momentarily there, creating a split-second of a ‘whoomph’ sound, and then it’s gone, nothing but the briefest of blurs.  Certainly there’s no time to notice any details about it at all.  The first thought is well, that must have been a short train, and then it occurs to you that you’re on a pretty long train, and that other train was probably similar in its length, and it dawns on you just how fast you really are moving over the ground.  Being the geeky sort, I did attempt to clock the speed with a GPS, but besides being an efficient way of moving about the country, the train is also an efficient blocker of GPS signals.  I never was able to get a lock.

The other thing to note about the TGV, and the SNCF railways in general, is how to make proper use of the bar car.  In the bar car there is a large and extensive menu of food, and behind the bar are various cabinets and ovens and such.  From this one might deduce that a meal can be obtained, but the veteran traveler of the railways knows that looks can be deceiving.  The thought of a hot sandwich, such as a Croque Monsieur (a favorite of mine, actually), was quite appealing when I saw it advertised, but when I asked for it in my halting and very bad French, the gentleman behind the bar was able to convey to me that his oven was out of order and so there was no hot food available.  It’s true that he did use language to tell me this, but the message really got through when he pointed to the sign on the oven that said… well, it said something in French, but it was red and it looked a lot like an “out of order” sign to me, so I got the point.  Not to be deterred, I selected a pair of cold sandwiches.  The barman went through his cabinets and…  the date stamp on the sandwiches was expired.  He looked for others:  expired.  He went through every cabinet.  In the end, he had exactly one type of small, uninteresting sandwich which was still safely edible, according to the label, and cabinets full of expired food, next to the inoperable oven.  Carole tells me that French people don’t really expect to buy food on the train, they usually bring their own, and so would we have done except we had just come from the airport, so I gather the barman was probably caught by surprise by a customer actually… gasp… ordering from the menu.

The coffee was good, however.

At Lyon there was an announcement over the intercom, something about “action industrielle”, and Carole informed me that beyond Lyon the bar car was operated by a different union (I think), and this union was on strike, so from this point the bar car was closed.  Either that, or the strike was just starting at the time we were in Lyon.  I was still very jet-lagged and tired, so my French was practically non-existent.  It did improve on later days, especially after copious consumption of coffee.

Once arrived in Carcassonne we were met at the station by Carole’s brother, Lionel, who drove us the remaining 8 miles to his mother (and Carole’s stepmother) Eugenie’s house in Montirat.

Montirat is probably not well known to most tourists, despite being just a handful of miles from what is arguably the third-most-visited tourist destination in the country.  It is a small village, with a population of about 70, situated at the end of a narrow, winding country road that is not much more than a spur from an only slightly larger regional highway.  It does boast a gite, or holiday rental home, but these are more likely to be occupied by French nationals on holiday than by foreign tourists (though I can highly recommend gites de France from personal experience on other occasions).  There’s a small church.  There’s no school.  The nearest bakery isn’t even in town, it’s out on the D3 highway.  What Montirat does have, however, is peace, quiet, and old-world charm.  It sits atop a hill, giving it a little bit of a view of the surrounding vineyards, and its main road curls around the hill in a way that would delight Tolkien enthusiasts (think Hobbiton).  At the apex of the hill, across the road from Eugenie’s house, are the crumbling remains of some old stone structure, redolent with hints of an unknown medieval history, now mostly buried in the grass and earth as farmers have gone about their business around it over the centuries.  The old ruin is all that remains of a probably 13th century watchtower, once part of an early warning system for the locals, who in the event of attack could have time to take refuge behind the walls of the nearby fortified city of Carcassonne.

We, meanwhile, took refuge from the winter rain and wind by spending our first days indoors, basically being lazy while recovering from jet lag and visiting with Lionel and Eugenie.  We ate well (it is France, after all), perhaps too well, a trend that was to continue throughout our stay and for which perhaps our stomachs were not entirely prepared. 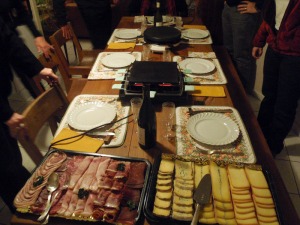 After a few days of easing into the French country life and decompressing from the stresses of work and air travel, it was time to move on.  Once again on the train, Carcassonne to Grenoble, with a change in Lyon, and soon we found ourselves at Carole’s mother Anne-Marie’s in-town condo, a somewhat different experience from the cozy country house in Montirat with its chicken coop and its big yard.  By now we were resurfacing into wakefulness, and we actually got out and walked about the city a little.  The weather even cooperated for this, clearing to magnificent crystalline blue skies for a day or two, enough to reveal the snow-covered Alps in their gleaming splendor looming directly over the city. 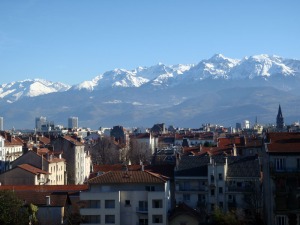 Even some of my French now began to return to me, although only if people were patient enough to speak very slowly, articulate very deliberately, and use only the simplest of words and grammar could I understand them.  However, I was able to get the gist of the conversations going on around me, and even put in a word now and then, stunning listeners with… well, not my erudition, but more likely my inability to speak even as well as a four-year-old.  Perhaps the simple sound of their beautiful language being mangled in my mouth shocked them senseless.  At least I didn’t ask for agua con gaz like I did during my first visit to France, twelve years ago.

A few very pleasant days, some more excellent meals, and it was time to take the TGV back to Paris, this time alighting at the Gare de Lyon in the heart of town, being met by our friend Isabelle, who with her daughter Lucie kindly hosted us for the remainder of our stay.  Isabelle and Lucie both speak English, and so now my hard-won language skills could fall back into disuse and disrepair.  Isabelle even took us to see a show, How to Become Parisian in One Hour, which was given almost entirely in English.

On another day we met another friend, Natalie, and wandered the streets, and it was while on the Champs Elysees and again near the Eiffel Tower that we encountered armed soldiers, in pairs, patrolling.  We had seen them in the airport, which wasn’t so surprising, and in the train station, which still made some sense, but when I saw men in camouflage carrying machine guns on the streets of downtown I really started to wonder if something was up.  I’m not sure if it’s a reaction to recent events, or simply stepped up alertness at key points during the holidays, when thousands of people are out and about, but mostly I thought about how those solders didn’t look a day over 18, and just how comfortable was I with a teenager with his finger poised over the trigger guard of a FAMAS or SIG 550 (I’m pretty sure I saw both models in use).

Now, just to justify this pure travel story on a genealogy blog, I did do a little research while in France.  Since we were, after all, visiting Carole’s family, I decided to research her ancestry a little.  As it turns out, Lionel has an entire book about their father’s ancestry, and Anne-Marie had several pages about her family, and very quickly we traced ancestors back to the 16th century in Italy, Germany, Switzerland, and of course France, with a number of connections reaching into Africa.  There are hints at some very interesting family stories, just waiting to be uncovered, but that will have to be another time, I think.

Because, after all, I returned home to Seattle to find a package waiting for me:  seventy-five pages, on CD, of my father’s personnel file from the Union Steam Ship Company, courtesy of the Wellington City Archives.